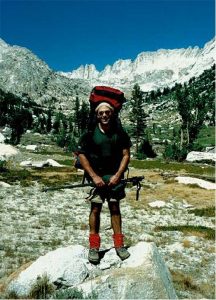 Early in my career, I learned new skills, traveled to new places, and met new friends. Three of these friends; Jaromir Divilek, Patrick LeBreton and John Bierschenk, shared my love of the outdoors so we started hiking together. Between 1990 and 2005 the four of us completed 15 annual backpacking trips in the American west. We hiked in California, Montana, Oregon, Utah, Washington, Colorado, and Idaho.  We loved Yosemite and Cascade National Parks so much that we visited both several times.

Our trips were four or five days in the back country, and we covered 35 to 50 miles during that time. We chose the hiking routes based on our desire to explore new areas and in locations where the trail systems allowed us to complete a big loop rather than doubling back on the same path.

When possible, we’d get together in person and throw a pile of paper maps on a coffee table, trace trails, consider the terrain, debate our choices, and imagine the fun we’d have. We often considered multiple areas during the process but would finally commit to one area. Saving the alternatives for another time.  The National Parks and wilderness areas that made the cut were Yosemite, Glacier, Eagle Cap, Zion, the Cascades, the San Juans, and the Sawtooths.

The trips started with each of us flying individually from Boston, Manchester, or New York City with all meeting in San Francisco, Portland, Seattle, or Denver. From there, we rented an SUV, piled in our gear, and drove towards the mountains. After a stop for the last of the food and cooking fuel, we’d enter the park or wilderness area and start our adventure. Several times, getting to the trail head was an adventure of its own requiring train rides, boat trips, or vans taking us far from our vehicle.

As we started up the trail, we’d clink our hiking poles as a group and cheer the days ahead.

Up with the sun, we prepared breakfast that often included granola, dried fruit, and black coffee. Then dried the dew off the tent, rolled up the sleep pad and tent, and stuffed the gear into our packs and hit the trail by 9am.

After three hours of hiking we’d find the nicest available lunch spot – be it in shade on scorching days or in the sun on the cool ridges. Lunch was some combination of bagged tuna, mixed nuts, crackers, peanut butter, jerky, and cheese. Midway through the afternoon we’d have some Gatorade, an energy bar, and mixed nuts.

By 4pm we were generally at our next camping spot.  Each of us had tasks to prepare for the night. We raised the tents, set up the “kitchen,” collected firewood, and pumped drinking water through a handheld filter. Supper could be rice, pasta, or lentils with some kind of protein. After cleaning up from supper we’d sit around a fire, chat, and watch the shooting stars or the path of the moon.

At daybreak, we’d do it all over again.

Flexibility to a good trait

By 1999, the process became routine. So we decided to start what became the “Third night” tradition. This was an extra special supper that one person designed, purchased, carried, prepared, and presented to the group. I set the bar super high on the first year, choosing to serve an international smorgasbord.  We started with smoked oysters from Thailand followed by tikka masala and lentils from India plus canned pumpernickel bread from Germany.  For dessert Swiss chocolate, of course. To top off the evening, I gave everyone a t-shirt I had custom designed and printed, with a cartoon image of a tie wearing professional reaching the peak of a flag topped mountain. Several of us still have and wear, the now tattered, shirt.

As time goes by

Although we stopped taking heavy pack trips in 2005, we still love spending time together and exploring new areas while discovering new trails and climbing new peaks. Even though we traded in our tents for nice hotels and our cookware and Jetboil for restaurants, we still complete kick-ass day hikes starting early in the morning. We still have a list of areas to explore and peaks to summit so we’ll keep pushing.

It makes me laugh to think how similar planning for our expeditions is like a work project. It requires communication with the participants, negotiation regarding the scope of the project, coordination and planning to get the job done right and follow through to get over even the biggest obstacles.